1. What world-famous hotel chains do you know? Give some their names.

3. Are there any hotel chains in your city?

Look at the photos of some well-known hotel – chains. Do you recognize some of them. 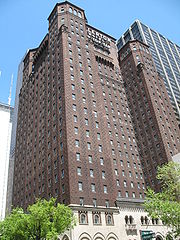 Study the text and note down the main facts of this chain development.

1 to start out – начинать профессиональную деятельность

The Marriott Corporation started out as a root-beer stand in Washington, D.C., in the hot summer of 1927. When business fell off that winter, the founder, J. Willard Marriott, responded with a plan to convert the root-beer stand into a "Hot Shoppe," which would serve chili con came and tamales based on recipes from the Mexican embassy. That plan was so successful that he expanded to other locations. Soon there were Hot Shoppes all over the Washington area. In 1937, the firm again responded to its environment by entering the airline catering business with an Eastern Airlines con­tract. Success there led to further expansion of catering services.

Not until 1957 did Marriott develop plans to link its success in restaurants and ca­tering to hotels. In 1989, the Marriott Corporation was rated the top major hotel chain for business travelers and meeting planners for the fourth year in a row, Marriott's .lodging business continues to grow, too.

J. W. Marriott, Jr., the current chairman of Marriott Corporation, is the son of the founder. He is a perfectionist when it comes to cleanliness and attractiveness. Marriott employees must follow a carefully defined, 54-step procedure in making up a room, doing each step in proper sequence. Bill Marriott also believes in keeping in touch with operations and personnel. He travels over 200,000 miles each year to visit all parts of his firm as well as his competitors' businesses.

The Marriott Corporation does over $6 billion in sales. It is organized into three primary areas: lodging, contract services, and restaurants. Lodging accounts for about 40 percent of sales but about half of profits.

Marriott's lodging operation includes nearly 103,000 guest rooms in over 360 ho­tels and resorts located throughout the-" United States, Bermuda, Canada, Central America, Europe, and the Middle East. Those units are organized by location and by the type of market served. For instance, the Fairfield Inn group serves the economy or lower end of the market; Courtyard by Marriott serves the middle of the market; and Residence Inn and Marriott Suites serve the high end of the market.

Restaurant operations include several groups, too. Hot Shoppes currently exists as 16 cafeterias and service restaurants in the Washington, D.C, area. Bob's Big Boy restaurants has over 200 units. About 150 Howard Johnson units are also operated by Marriott. The Roy Rogers chain operates or franchises over 550 restaurants. And Travel Plazas by Marriott operates over 100 restaurants, gift shops, and related facili­ties on numerous highway systems.

The Marriott Corporation, as a major aspect of its control function, monitors its environment closely. It has been highly effective in responding to and taking advan­tage of the changing and expanding role of women in business. Marriott is considered to be one of the most effective organizations in the United States in what is known as competitive intelligence or the art of legally spying on competitors. For instance, be­fore launching its Fairfield Inn chain, Marriott sent a team of six employees around the country for six months. The team stayed in every inexpensive hotel chain in exis­tence, gathering information about such things as the quality of room service provided, the brands of soaps and towels used, and the construction and soundproofing of walls. Using that information, Marriott's Fairfield Inn was able to become the num­ber 1 chain in the economy market in its first year of operation.

The Marriott family owns 21 percent of the stock of the firm and seems destined to control the company for some time. Bill Marriott is the CEO; his mother is a vice presi­dent and director; and his brother is vice chairman. In addition, his sons and a son-in-law hold managerial positions in the firm, having worked their ways up from menial jobs that helped them learn the business. This home-grown approach to staffing in management enables the firm to respond quickly to opportunities but also can discour­age nonfamily members in their quests for top spots in the firm.

1. Find English equivalents for the following Russian words and word-combinations

3. Find antonyms to the following words. Consult the dictionary if necessary

4. Study the following group of words having the same root. Pay attention to word-formation. Make up sentences of your own.

5. Match the words with their definitions.

6. Scan the text once again and say if the statements are true or false.

1.The Marriott Corporation began as a small motel near the motorway.

2. The company is engaged only in lodging business.

3. The Marriott Corporation is the family-run company.

6. Marriott’s represents the expanding role of woman in business.

1 .How did the Marriott Corporation begin its existence?

2 .What are the main segments of market the company involved in?

3. Is lodging business the only business it runs.

5.How well has Marriott monitored its environment?

6.What is your reaction to the home-grown approach to developing manages?

7. Where and how do employees get knowledge and experience?