Much of the pre-history of public relations is linked with the growth and maintenance of religion, one of the most basic and cohesive aspects of society throughout the ages.

John the Baptist (right) is recognized in the social history of Christianity as the precursor or advance man who was effective in generating among his publics an anticipation and enthusiasm for Jesus Christ.

In the mid-First Century, Peter and Paul led the Christian Apostles in their use of many persuasive techniques, such as speeches, staged events, letters and oral teaching. Their aim was to increase interest in Jesus and his message, to increase membership in the new religious movement, and to maintain morale and order among church members. 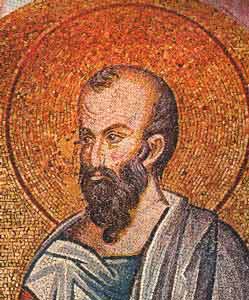 Paul of Tarsus (left) and the gospel writers Matthew, Mark, Luke and John used the strategies of interpretation and audience segmentation, each presenting essentially the same story, as it developed through a process of telling and re-telling, writing four different versions to appeal to the interests and needs of four different audiences.

The Roman Emperor Nero (right) used the strategy of orchestrating events when he blamed the burning of Rome on the Christians. It is an example of telling your side of the story first so that any other versions are received as being different from what people already have heard. 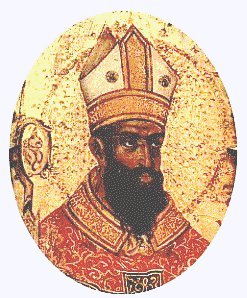 The early Christian Church preserved and enhanced the concepts of rhetoric. In Roman Africa, the 5th Century philosopher-bishop Augustine of Hippo (left) developed the art of preaching, insisting that truth is the ultimate goal of such public speaking. Later in Northern Europe, the 8th Century Saxon theologian Alcuin reinterpreted Roman rhetorical teachings for the Emperor Charlemagne.

Use of public relations strategies and tactics was not limited to the Christian church. In 6th Century Northern Africa, the prophet Mohammed sometimes retired to an out-of-the-way place to ponder problems facing his people, eventually to emerge with writings that he identified as the word of Allah. These writings, eventually assembled as the Koran (right), thus received a credibility that led to easy acceptance by his followers. 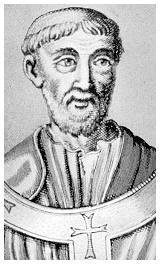 In the Middle Ages, the church applied principles of persuasive communication in an effort to recapture the lands of Christian origin. Pope Urban II (left) in 1095 sent his message throughout Europe using the efficient communication system of monasteries, dioceses and parishes. He used a sustained approach that involved all the communication tactics of the times, including writing, public speaking, word of mouth, slogans and symbols. His persuasion to influence public opinion was effective, as he attracted thousands of volunteers for the first of a series of Holy Crusades.

In 1215 the archbishop of Canterbury, Stephen Langton, used tactics of lobbying and government relations as he persuaded the influential English barons to join him in demanding that King John recognize the rights of both the barons and the church. The result of this successful persuasion was the Magna Carta (right), the document that laid the foundation for constitutional government not only in England but eventually around the world.

Later in the 13th Century, the philosopher-monk Thomas Aquinas (left) revisited Aristotle to study the persuasive nature of religious communication. Throughout the centuries, the various branches of the Christian Church developed the apologetics, the systematic attempt to assert the reasonableness of faith and to refute opposing arguments. Modern-day preachers and evangelists continue this tradition in persuasive communication for religious purposes. 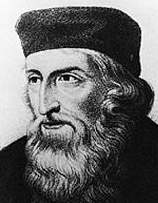 In England, John Wycliffe (right) courted public opinion when he took his campaign for church reform to the people in 1351. He used illegal street lectures, pamphlets and books to win over the common people to his cause. Capitalizing on his success, the priest became a writer for English royalty in its on-going feud with the clergy over church-state issues.

Three hundred years after Wycliffe, another priest, Martin Luther (left), courted public opinion through similar means and for similar purposes – and with greater success – when he posted his ideas on a church door in Germany, igniting what became known as the Protestant Reformation. Much of the success of Luther's reform movement was bided by two developments in technology and economics. The technology was the newly invented printing press with movable type; the economic development was the emergence of an increasingly literate middle class, which could read the mass produced Bibles and religious tracts. 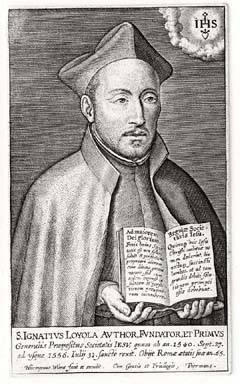 In response to Luther and his colleagues, the Catholic Reformation similarly used persuasive communication techniques. Much of the Catholic Reformation was fostered by Ignatius Loyola (right) who founded the Society of Jesus (Jesuits). Both sides used common public relations strategies such as appeals to both positive and negative values, third-party endorsement, orchestration of the message, use of popular spokespersons, and so on, as well as public relations tactics such as speeches, letters, books and pamphlets.

Pope Gregory XV popularized the word "propaganda" in 1622 when he established the Congregatio de Propaganda Fide (Congregation of the Propagation of the Faith) to spread the church's message into non-Christian lands. The term then was an honorable one. It did not take on negative connotations until three hundred years later, when the Nazis used it with a monumental disregard for honesty and ethics and later when it became associated with the 20th Century Cold War between communist and democratic nations.

One of the major religious events of the 20th Century was the Roman Catholic Church's Second Vatican Council, which among other things led to the de-Europeanization of the church and its adaptation to the cultures of its members in Asia, Africa, Latin America and elsewhere – another public relations strategy of segmenting the audience and developing a message approach based on the wants, interests and needs of each particular public.

Now, at the beginning of the 21st Century, religious organizations continue to use public relations strategies and tactics. Groups translate the Bible and other religious books into the language of the people, often paraphrasing the message or revising it with contemporary experiences. Churches and synagogues, as well as religions organizations such as dioceses and districts, employ their own public relations people, have interactive Web sites, and function at a very high level of professionalism. The Religion Communicators Council (formerly the Religious Public Relations Council) is the oldest professional association of public relations practitioners in North America, older even than the Public Relations Society of America