Ptah-hotep, the advisor to one of the ancient Egyptian pharaohs, wrote about 2,200 BCE of the need for communicating truthfully, addressing audience interests, and acting in a manner consistent with what is being said.

Archeologists have found ancient bulletins and brochures in ancient Mesopotamia (present-day Iraq) dating to about 1,800 BCE. These publications on stone tablets told farmers how to sow crops, irrigate their fields, and increase their harvests. These were important goals for monarchs who wanted their followers to be well fed and prosperous, both requirements for a stable empire.

In 5th Century BCE Greece, the practice of democracy required that citizens could effectively argue their point of view. The Sophists taught the skills of public speaking, often arguing whichever side of an issue that hired them. Protagoras (right) is one of the best-known Sophist teachers. 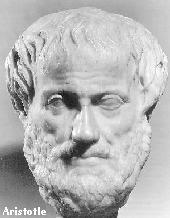 Later, in the 3rd Century BCE, the philosopher Socrates of Athens taught that, rather than the relativism of the Sophists, effective communication should be based on truth. His student, Plato, carried on Socrates' work. But it was Plato's student, Aristotle of Athens (left), who has contributed most to contemporary communication thought. Aristotle analyzed persuasive communication and taught others how to be effective speakers, specifically by developing compelling and ethical arguments to offer verbal proofs. Aristotle's book Rhetoric remains influential to this day.

In the civil realm, Philip of Macedonia had conquered the whole of Greece. His son Alexander the Great (right), was a student of Aristotle. Philip extended his rule throughout Northern Africa, Asia Minor and India. Both rulers had gold and ivory statues of themselves placed in towns and temples throughout the conquered lands as constant reminders of their presence – a common technique associated with public relations, still practiced in examples such as commemorative stamps, monuments, stadiums, named buildings, and so on.

Elsewhere in the classical Mediterranean world, others were also studying communication. In Sicily, Corax of Syracuse wrote a book about persuasive speaking. In Rome, Tullius Cicero (left) developed the earlier Greek rhetorical method for presenting persuasive arguments in public, and Marcus Fabius Quintilianus taught about the ethical content of persuasion.

The Roman general Julius Caesar, in the mid-First Century BCE, sent public reports back to Rome about his military and political victories in Gaul. Later, as ruler of Roman republic, he ordered the posting of Acta Diurna, regarded as the first public newsletter, to keep the citizenry informed. 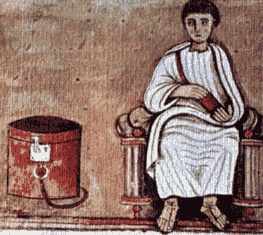 After a lengthy civil war that destroyed the 500-year-old Roman republic, Augustus became the first Roman emperor in 27 BCE. Augustus courted public opinion, realizing that he needed the support of the people in order to reign successfully. One of his tactics was to commission the poet Virgil (right) to write The Aeneid, an epic poem that identifies Rome as the fulfillment of a divine plan and which depicts Augustus as being ordained by the gods to save and rebuild Rome after the collapse of the republic.

Exercise 6. Read the text once to get the general idea, try not to spend more than 10 minutes. Complete the sentence as to the text:

(A) the history of advertising from Egyptian time to this century.

(B) the use of advertising techniques for non-commercial purposes.

(C) the history of advertising from Egyptian time to 27BCE.

Exercise 7.What do the following figures and dates mean?

Exercise 8. Read the text and decide whether the following sentences are true or false.

3. Archeologists have found ancient bulletins and brochures in present-day Iraq.

5.     Plato is one of the most famous Sophist teachers.

6. Socrates said that effective communication should be based on truth.

Exercise 9. Read the article again and underline words and phrases that you do not know. Write your own definitions. Use a dictionary if necessary.

Exercise 10. Analyze the sentence “But it was Plato's student, Aristotle of Athens, who has contributed most to contemporary communication thought. ’’

1. What did publications on stone tablets tell farmers?

2. Who is one of the best-known Sophist teachers?

3. What did Socrates of Athens teach?

4. Who carried on his work?

5. Who has contributed most to contemporary communication thought?

6. What book by Aristotle is well-known nowadays?

7. Where did Philip of Macedonia and Alexander the Great have statues of themselves?

8. What is Julius Caesar famous for?

9. What destroyed the Roman republic?

10. Who did Augustus ask to write an epic poem?

1. The publications on stone tablets taught farmers to…

a) speak in public

c) is of no interest

d) has got out of existence

3. Monarchs wanted their followers to …

4. The civil war that destroyed the 500-year-old Roman republic was …

5. Augustus wanted the … of the people to reign successfully.

Exercise 13. Look through the text again. Give the main points of each paragraph of the text.

Exercise 14. Put a key-question to each paragraph of the text given above.

Exercise 15. Make up a detailed plan of the text.

Exercise 16. Abridge the text by way of shortening each paragraph (throwing off unnecessary sentences and even words).

Exercise 17. Summarize the text to the others in your group.

Exercise 18. Identify and discuss contemporary parallels to some of these examples of the ancient origins of the public relations.

Exercise 19. (Interview) Think about the questions you would ask any of the famous people mentioned in the text. Make up dialogues with your partner.

Exercise 20. Collect all the information and write an abstract under the title “Famous ancient people”.

Exercise 21. Write a summary of the text. Use ‘The author describes (presents, touches upon)’ etc.