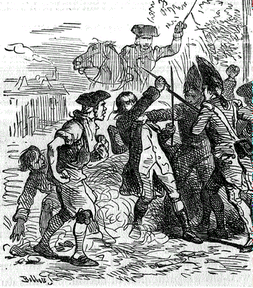 Use of an organizing group, first the Caucus Club and later the Committees of Correspondence in each colony

Creation of activist organizations (Sons of Liberty - left) and 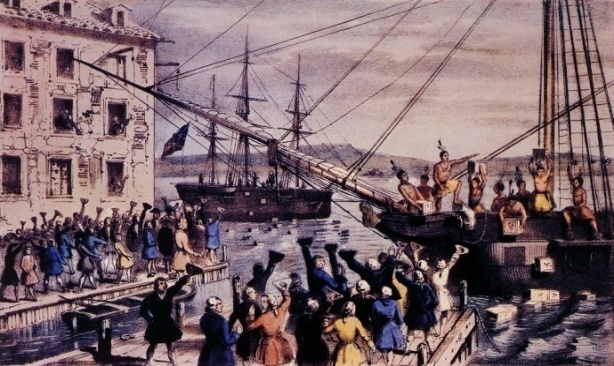 Staged events such as the Boston Tea Party (right) and hangings in effigy. (The Boston Tea Party was a pseudo-event designed to shock and satirize the British tea tax, and to symbolize colonial defiance. In fact, many colonists themselves were shocked and outraged by the act, but this internal dissent was not reported.

On the contrary, the "official" version of the story was the first to arrive in England, thanks to a sailing skill of a sympathetic ship's captain, and in London Benjamin Franklin (left) lost no time in being first to circulate the revolutionary version of the event, especially among the many American sympathizers in the British government. 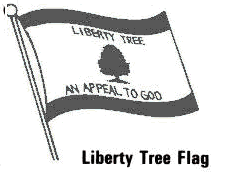 A series of communication strategies using persuasive messages, including the use of songs of protest and patriotism, symbols such as the Liberty Tree (left), and slogans such as "Taxation without representation is tyranny." 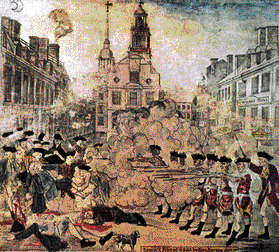 Orchestrating the message, with a strategy of "Put your enemy in the wrong and keep him there" One example of this is the promotion and elaboration of events such as the Horrid Boston Massacre (right). A British sentry fired into a riot caused by a drunken mob. Said one historian: "...turned the dead port troughs into martyrs, orating and thundering how they had been shot down in cold blood by hireling troops." Essays, poems and engravings followed. The story was widely circulated, and the date of 5 March 1770 was memorialized throughout the colonies – except in New York, where continuing rivalry between Boston and New York City caused the colonial leaders to suppress the story of the Boston Massacre. 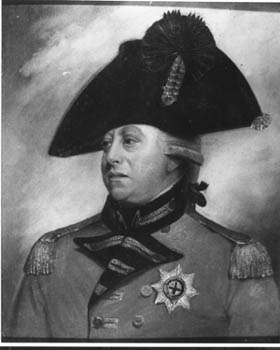 A campaign theme of "the doctrine of natural rights"

A strategy of demonizing the enemy, such as the ridicule of King George (left) and other attempts to misrepresent and malign the British crown and Parliament

A similar strategy of ostracizing sympathizers of the enemy, such as plays and poetry by people such as Mercy Otis Warren (right) ridiculing loyalists in the colonies, and the Patriot Committees in each state that kept legal and social harassment of loyalists (and even suspected loyalists), including confiscation of their land and money. 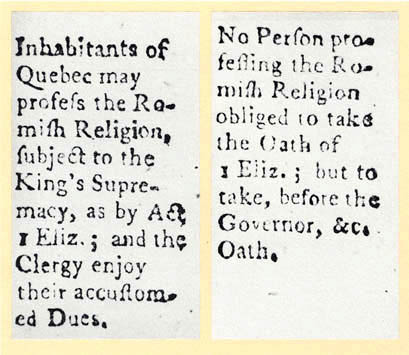 A negative strategy of capitalizing on people's fear and bigotry, such as the anti-Catholic prejudice fanned in the colonies after England promulgated the Quebec Act (left). The law allowed Catholics in the former French colony of Quebec the right to practice their faith, something not allowed in most of the American colonies. The colonial leaders fueled the revolutionary sentiment against English by playing to the anti-Catholic bigotry in what essentially were Protestant colonies.