The first version of softball was invented in Chicago , Illinois on Thanksgiving Day, 1887 by George Hancock as a winter version of baseball (4).

The first version of softball was invented in Chicago, Illinois on Thanksgiving Day, 1887 by George Hancock as a winter version of baseball. It was intended to be a way for baseball players to keep in practice during the winter. At the time, the sport was called "Indoor Baseball". Yale and Harvard alumni had gathered at the Farragut Boat Club in Chicago to hear the score of the annual football game. When the score was announced and bets were paid, a Yale alumnus threw a boxing glove at a Harvard supporter. The other person grabbed a stick and swung at it. Hancock called "Play ball!" and the game began. Hancock took a boxing glove and tied it into a ball. A broom handle was used as a bat. The first softball game ended with a score of 44-40. The ball, being soft, was fielded barehanded rather than with gloves like those which had been introduced to baseball in 1882. Hancock developed a ball and an undersized bat the next week. 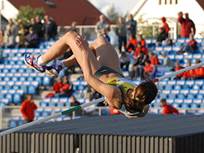 H igh jump is an athletics (track and field) event in which competitors must jump over a horizontal bar placed at measured heights without aid of any devices. It has been contested since the Olympic Games of ancient Greece. Over the centuries since, competitors have introduced increasingly more effective techniques to arrive at the current form.

In a competition, the bar is initially set at a relatively low height, and is moved upward in set increments. Each competitor has the option of choosing at which height they wish to start, as long as the height is greater or equal to the designated starting height for that competition. The starting height is usually determined by the games committee for the competition.

The modern high jump bar is made of glass-reinforced plastic or aluminium. Other materials are allowed, but there are weight and sag restrictions. The bar is approximately 4 metres in length, with a round, triangular, or square cross-section for most of its length, and two square resting points at each end. It is placed at a measured height on two uprights, or standards, which allow the bar to rest on its ends at a measured height. Cleared heights are reported by measuring from the take-off level to the top edge of the lowest part of the bar. Directly behind the bar is a soft foam mat that allows for a safe landing. Competitors must jump off one foot to clear the bar. Although they may touch the bar in their clearance, the jump is ruled unsuccessful if the bar falls. In rare instances competitors have been allowed to retry an attempt where the bar has fallen. This may occur if the official declares that the bar fell due to external circumstances such as wind, rain or faulty equipment.

Once a competitor has elected to begin, they receive three attempts at each height and once they clear a height, they are cleared until the next height. Competitors can choose whether or not to attempt subsequent heights. A competitor may choose to pass at a given height or, after failing to clear the bar at a given height, may "pass" on subsequent attempts at that height. Any competitor who records three consecutive misses is out of the competition. The competitor who clears the highest jump is declared the winner. 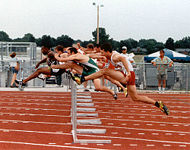 Other distances are sometimes run, particularly indoors. The sprint hurdle race indoors is usually 60 metres for both men and women, although races 55 meters or 50 metres long are sometimes run. A 60 metre indoor race is run over 5 hurdles. A shorter race may have only 4 hurdles. The long hurdle race is sometimes shortened to 300 metres or 200 metres, usually for indoor or high school races.

There is a certain technique that is desirable to accomplish a smooth hurdle action during the race. Other racers may depend solely on their speed; however, if you have the "perfect technique" you will do far better than someone that simply jumps over the hurdle. When approaching the hurdle, you do not want to stutter (a term used to refer to the cutting of your stride length before reaching a hurdle). You then attack the hurdle by pushing away from the ground with the trail leg and leading with the knee of the lead leg. The goal is to minimize the deviation from normal running technique.

In men's hurdles it is usually necessary to straighten the leg at the top of the flight path over the hurdle, however a partial bend in the knee gains a faster push of when you hit the ground. As soon as the foot has cleared the hurdle, the knee starts bending again to lessen the effect of a long, slow pendulum. In women's hurdles, the lead leg is usually straight and the center of gravity does not change path from a normal running stride. Another way to view it is the foot path: "shortest path up and shortest path down". The opposite arm reaches farther forward and the elbow travels out to the side and then behind to make room for the trailing leg. The trailing leg also leads with the knee, but the foot and knee is horizontal, tucked up as tight as possible into the armpit.

Running is a sport known to be good for health; it not only helps breathing and heartbeat but it is also a good exercise because it burns any spare calories. Running keeps a person fit and active. Running makes a person thirsty, so it is important to drink water when running. Some people may hate running because it is an hard and exhausting work.