2) Who can participate in synchronized swimming?

3) What do swimmers have to put on their noses?

4) What events do you know in diving?

5) Water polo team consists of six players and one goal keeper, doesn't it?

6) What is the object of the game?

7) What is the area of the swimming pool?

IX. Insert the missing words without using the text above:

(1) is like handball in water. There are six players on each side and one (2). They are not allowed to touch (3) of the pool at any time. (4) has 35 seconds to score a goal. If they are not successful the defense will get the ball. There are (5) in a game, each is seven minutes long. The winner is the team that scores the most goals.

X. Speak on one of aquatics. 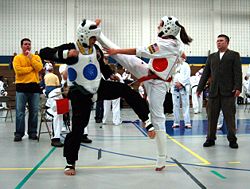 Jigoro Kano introduced judo to Japan in 1882. He devoted his life to promoting the sport and training new athletes. Kano was a member of the International Olympic Committee and an associate of Baron Peirre de Coubertin, founder of the modern Olympic movement. Men's judo was not added to the Olympic Games until 1964 and women's judo became an Olympic event in 1992.

The uniform for judo is called judogi. These outfits are made of heavy cotton to allow athletes to grab on to their opponent’s collar, chest, and belt. The colour of your belt tells how good you are at the sport. Beginners wear white belts and they work their way up to yellow, orange, green, blue, brown, black, red and white (or black), and red (or black).

Judo takes place on a mat about 26 feet by 26 feet. Competitors bow to each other at the beginning and at the end of the contest to show respect to each other. The winner is the person who has scored more points at the end of a five minute period. There is a referee and two judges who award the points.

Taekwondo came from Korea about 2000 years ago. It is a defensive art of self defense. Do you know that the uniform in Taekwondo is really called a dobok? The belts are white, yellow, orange, green, blue, purple, red, brown, red black, yellow black, black blue and finally black belt. It takes two to three years to get good enough to earn a black belt.

In the Olympics the contestants must wear body protector, forearm protection, shin guards and tooth brace that protects your mouth from getting hit. You wear a head brace too. It protects the head from damage. Then it's time to fight!

In the Olympics there are competitions for men and women. They are divided up according to weight. Taekwondo became an official Olympic sport in the 2000 Olympics.