VII. Insert the pronouns “some”, “any”, “no”, “every” and their compounds
⇐ ПредыдущаяСтр 6 из 9Следующая ⇒

4) Is there ... interesting in the program of the Olympic Games?

10) I cannot find my swimming goggles.... I always put them ... and then look for them for hours.

Many trails were originally fireroads, animal paths, hiking trails, or multi-use paths that were simply used for these new trail users. Single-track mountain biking creates more conflicts with hikers, particularly in forested areas. There are also some concern single-track biking leads to erosion. Because of these conflicts, the interpretation of the Wilderness Act was revised by the National Park Service to be able to exclude bicycles in certain areas.

Opposition to the sport has led to the development of local, regional, and international mountain bike groups. The different groups that formed generally work to create new trails, maintain existing trails, and help existing trails that may have issues. Groups work with private and public entities from the individual landowner to city parks departments, on up through the state level at the DNR, and into the federal level. Different groups work individually or together to achieve results.

X. Speak on cycling or triathlon. 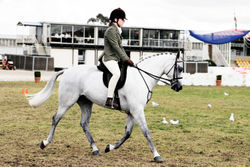 In the Olympics, men and women can ride together for the same team and against each other in the same events. The rider and the horse both win medals. They are considered a team. There are different kinds of ways to ride. In the Olympics they ride English style. Here are some of the events.

Jumping events are held in a grass or sand ring. The horse and rider are judged for speed and accuracy. Contestants jump over 12 to 15 jumps in a certain order and have to do it in a certain amount of time. The horse and rider are penalized if they refuse a jump, knock down a jump, fall off, or go over the time limit. There are several rounds to the competition and the rider and horse with the most points win.

Dressage events are also held in a sand ring 60m x 20 m. Dressage has three rounds. Grand Prix, Grand Prix special and Grand Prix Freestyle- sounds like Grand Pree- (classes in Dressage). Riders will choose the music they perform to and they choose the actions they perform. In Dressage the riders wear top hats.

Eventing is part Dressage, part cross-country, and part Jumping. Rider uses the same horse for three days with one event on each day. The cross country race tests endurance, speed, and jumping ability.

Equestrian event became a part of the Olympics in 1900. In 1976 Princess Anne of Great Britain was a member of her country's Equestrian team.

I. Give Russian equivalents to the following words and word combinations:

Can ride together, the rider and the horse, to be considered, show jumping, a grass or sand ring, to be judged for speed and accuracy, the contestants jump, to be penalized, to refuse a jump, to go over the time limit, to choose the music, to wear top hats.

3) Horse and rider are penalized if they....

1) Equestrian is for men only.

2) In the Olympics the participants ride German style.

3) Jumping events are held in a grass or sand ring.

5) The riders mayn't choose the music they perform to.

VI. Make your own sentences with modal verbs should, may, must, need, can. Use new words and word combinations. 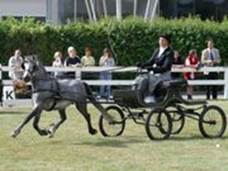 Horses, mules and donkeys are driven in harness in many different ways. For working purposes, they can pull a plough  or other farm equipment designed to be pulled by animals. In many parts of the world they still pull wagons for basic hauling and transportation. They may draw carriages at ceremonies, in parades or for tourist rides. As noted in "horse racing" above, horses can race in harness, pulling a very lightweight cart. At the other end of the spectrum, some draft horses compete in horse pulling competitions, where single or teams of horses and their drivers vie to determine who can pull the most weight for a short distance.

Fencing was known in Egypt, China, India, and Greece. Homer, a famous Greek author, wrote about a fight with swords in his book,  «The Illiad». There are four sports that have been included in each modern Olympic Games since 1896 and fencing is one of them.

To be a fencer you need a sword, a protective vest and a jacket, a mask, and a glove. Fencers also wear breeches and special fencing shoes. There are three different kinds of swords. The foil is the lightest, the epée was the sword used for dueling years ago, and the sabre is the heaviest sword. Fencing is an indoor sport. Fencers use a special surface about 46 feet long and 5 feet wide.

Each bout has three rounds that last three minutes each, with one minute between rounds. The winner is the first fencer to score 15 hits on the opponent or the fencer who scores the greater number of hits by the end of the bout. If the players are even by the end of regular match time, one minute extra time will be fenced and the winner will be the first to score a touch on the opponent.

In the Olympic Games there are six disciplines of fencing that include six individual and four team events.

I. Give Russian equivalents to the following words and word combinations:

Fencing, a fight with swords, a protective vest and a jacket, to use for dueling years ago, an indoor sport, a special surface, each bout has three rounds, to score 15 hits, a touch on the opponent, to include six individual and four team events, men's foil, women's sabre, men's épee.